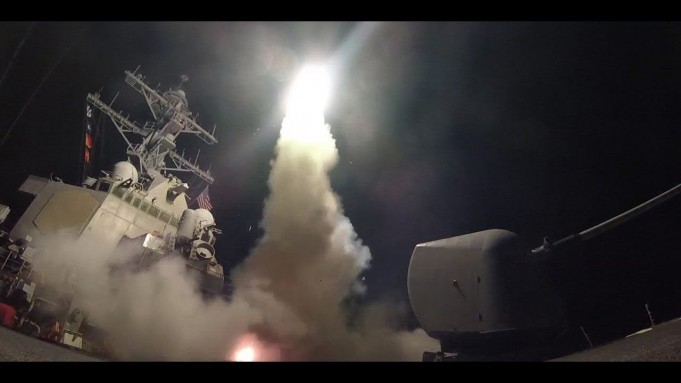 Donald Trump has kept his word. He has ordered the US military forces to commence bombings of key locations in Syria.

The Bombings have already started and residents in Damascus are currently posting online about the attacks they are witnessing.

Donald Trump describes the attacks as “precision strikes” but that is almost impossible to do in a crowded city like Damascus. Observers on the ground are bracing for collateral damage from these strikes.

Syria air defence has shot down some of the missiles already

The Syrian Army has been given modern air defence systems by Russia. These can shoot down missiles that are being fired over their airspace. Reports coming in from Syria are that some of the missiles that were heading for Damascus have already been shot down.

Cruise missiles being shot down over #Damascus – Strikes by the US, the UK and French militaries in the Syrian capital. #Syria #France #UK #US pic.twitter.com/8wQPL8CpLk

The Missiles are being fired mostly from ships docked out at sea. This is safer for the American, French and British coalition as it reduces the risk of getting a multi-million dollar jet plane shot down out the sky.

They are not worried about a few missiles being shot down but a fighter jet or a bomber would be a total disaster.

Syria State TV claim they have shot down more than 10 missiles pic.twitter.com/z1I0wddLUJ

This could escalate and trigger a new cold war

Russia has a strong presence in Syria. They use the country as a base and that is one of the reasons they cannot afford for Bashar Al Assad to lose power. If he falls then Russia will no longer have an ally or base in a very key region.

This is one of the reasons they are happy to give the Syrians so much military support as they know the consequences of Assad being removed from power is against their interest. This is not about saving children and helping out people.

Russia and America both have their own agendas and they do not care about who is in the middle. The ugly face of geo-politics shows its face again.

The worst case scenario is there is some military contact between America and Russia and see the fire being lit for World War 3 right before our eyes.

Stop Tearing Down Floyd Mayweather To Build Up Akon