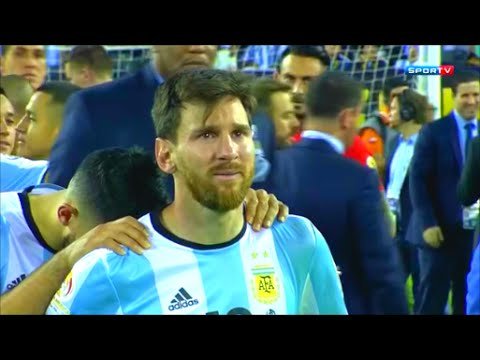 Lionel Messi has four Champions League medals but only three of those he really earned. He was a 17-year-old kid on the bench when Ronaldinho and co handed him the first one in 05/06.

Since then Messi has gone on to win three more Champions Leagues and five Ballon d’Or awards. He has sealed his spot as one of the greatest players of all time.

don’t get mad yet, look at the facts

Lionel Messi has lost not one, not two but three Copa America finals. This is the biggest competition in South America and every time Messi was called upon to deliver his country this trophy he has failed.

2015 and 2016 he lost to Chile and even missed a decisive penalty. After that game, he infamously retired from international football. He basically quit and gave up but he was given a pass for this again. He was apart of the most talented team in South America and he still couldn’t deliver Argentina their first major trophy since 1993.

The little genius reached the finals of the World Cup in 2014. The world was poised to see the ascension of Messi as the new King of Argentina and replace Diego Maradona. This never happened.

Argentina lost and the man who was hailed as the best player in the world at the time, could not influence his team to victory.

Imagine if someone told you that Lionel Messi has not scored in nine Champions League quarter-final seasons, would you believe them? well, it’s a fact. This is his record in the quarter-final stage for every season where Barcelona has been knocked out since his debut. Now you might argue that quarterfinals aren’t the end of the tournament, it’s the finals that count. Well in all four winning Champions League wins Messi has been apart of, you know how many goals he has scored in the final? one. Uno. Une.

Cristiano Ronaldo, on the other hand, thrives on the big occasion. He has scored in three different Champions League final games, the first and only player to do so.

This season he has dragged a poor Madrid team to the brink of the Semi-finals of the biggest club tournament in the world. Unless there is some major mishap against Juventus in the second leg, Real Madrid is in another semi-final and are on their way to winning their third trophy in three years.

Messi has always had better players around him than Cristiano. Messi played with Ronaldinho, Xavi, Iniesta and Etoo at club level. For Argentina, he played with Di Maria, Aguero, Mascherano, Tevez and Higuain.

Ronaldo has never had that kind of talent beside him at club or country level yet he has won the European Championship. A trophy that is much harder to win than Copa America.

When your back is against the wall, Ronaldo is the better player

Remember when Barcelona pulled off the amazing comeback against PSG last year. Do you remember who was the star of that show? it was Neymar. Messi did not drag that team to victory in that game, it was the Brazilian and his presence or lack thereof was very present against Roma.

Not until Ronaldo is retired will everyone give him the credit he truly deserves. He is the greatest clutch player in football history. When your back is against the wall and you want someone to step up, Ronaldo is the better choice and not Lionel Messi.