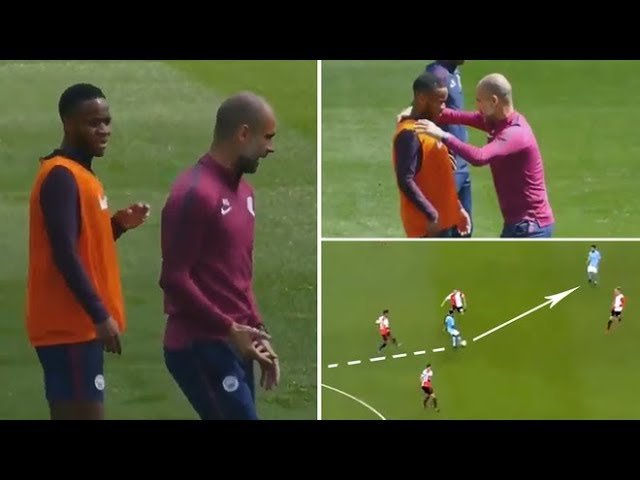 Pep Guardiola’s critics are funny people, they claim all he does in inherit the best players in the world. They tell you that he shouldn’t be given that much credit because anyone can win when they have people like Lionel Messi, Kevin de Bruyne, David Silva, Raheem Sterling etc. in their team. What these simpletons are ignoring is that alot of superstars mentioned were not yet at their best when he took over.

Since all you need is good players and the manager doesn’t matter, why didn’t Barcelona keep winning before Guardiola took over? Messi, Xavi, Iniesta were all at Barcelona but the season before they did not win a single trophy. It was under Pep Guardiola’s leadership Lionel Messi became one of the two undisputed Kings of football. Before Pep, Messi was just a brilliant creative player who would contribute to the goals, but he ended becoming a goal scoring machine that is rivalled only by Cristiano Ronaldo to this day.

Raheem Sterling has taken his game to a new level

If all you need is the footballer’s talent, then surely Raheem Sterling should have already been doing what he is now. He has worked with various managers and all we saw was a young guy with incredible speed and not much more. His goalscoring was mediocre, his decision making in the final third was questioned and people were getting ready to write him off as a one-trick pony.

Now that he is working with Guardiola, we are seeing a whole different player. His last-minute goal against Southampton proves this is not the same kid we saw previously in the Premier League. Old Raheem Sterling would have disappeared during those final minutes or look to pass the ball for someone else to take such a daring shot. This new guy is booming with confidence. Match Facts Here

Other players are now starting to look like world beaters under Guardiola’s leadership. Kevin De Bruyne, Fernandinho and others were already brilliant players but now they look world class. What will the #fraudiola preachers claim now? that this has nothing to do with the Spanish coach? nonsense. There are alot of talented players who never reach their full potential because it takes a special coach to bring out the best out of certain players.This is what Shankly, Ferguson, Guardiola etc have over their counterparts, they can take someone great and make them world class.