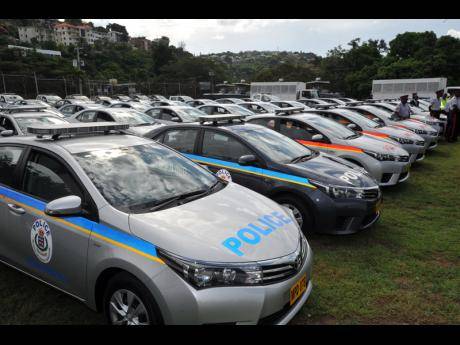 The Jamaica Constabulary Force are jumping for joy after receiving 100 new cars to mash up like they did all the previous ones. Police cars run down faster than a Digicel data plan in Jamaica. Remember when those shiny new “Kingfish” Toyotas first came out? within less than a year they were looking like the cars in the movie “Mad Max”.
New Police Cars

Are they not taught how to drive or they just throw anybody the keys and say “go on, crush the road”. There are Police cars with one headlight, that pulls people over and ticket them for having one headlight. if you point out that they too only have one light, they start to react aggressively; “mine mi haffi do this and that to you” etc.

mash them up, you will get more squaddie

Some officers think like a child who knows no matter how many times they destroy their toys, mommy and daddy will buy more. Hey, if you knew taxpayers were covering the cost of your car tyres, you probably wouldn’t try as hard to dodge potholes. Just like a rented car, people just rag it and carry it back when they are done, with little respect for the people who bear the costs, which in this case is the taxpayer.

wife and matey shall be celebrating

All the wives/mateys who get pick up and drop off in Police cars, your Christmas come early. Now you can upgrade from the old “Kingfish” to a new Suzuki Vitara and Toyota Corolla, with nicer seats and the AC cold like the North Pole. Bashment! I saw one drive past me in St. Ann with her foot on the dashboard, spread off like it’s her man personal car. Fun and joke aside, let’s hope these 100 cars and put to good use and are useful in the fight against crime. Obviously, there are alot of responsible, dedicated officers who want to make a positive change in the country but alot of their colleagues give them a bad name and make it hard for the Jamaican people to take them seriously.