Things are going from bad to worse for Rachel Sukhdeo. First, her husband Sheron Sukhdeo was killed, now her brother Phillip has been killed in almost the same spot outside her mother’s house.

Phillip Bassant was outside his mother’s home in Charlieville yesterday when he was shot dead.

Warning, the video is graphic

It was all good just a month ago

Within the space of a month, Rachel has lost her husband Sheron who was killed on March 26th. He was killed outside her mother’s home. Sheron’s Funeral

Then she was arrested for obscene language and assault when she refused to comply with bailiffs.

Now her brother Phillip is dead. He was currently facing the legal system for charges related to guns and ammunition possession.

Those charges were still pending up until his death. She has to leave Trinidad for the sake of her kids

It is becoming clear that these murders are not one-offs. They are targeted towards the various members of the family and it will only get uglier when the reprisals start.

Rachel Sukhdeo recently built very high barb wire around her home, it looks like a prison now. That is no environment to raise children. 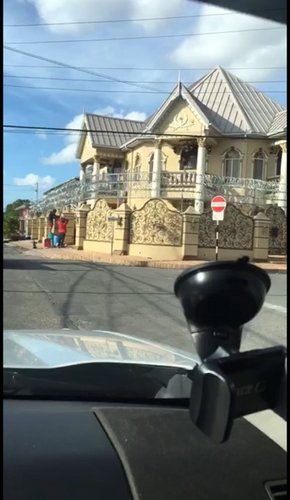 It would be a good idea to leave Trinidad with the kids and start a new life elsewhere. It isn’t easy to start over but the alternative could be worse.

Sheron is already dead, she is a sitting duck now as he can’t protect her anymore. His enemies are automatically her enemies, that is the unfortunate reality of the streets.

Whatever their father did, those children are still innocent and people must remember this. Their mother must make tough decisions to ensure their safety and her own.

They are already fatherless, the last thing they need is to become orphans.

We will update you as we get more info on the killing of Phillip Bassant.

Apple Iphone Explodes As Man Bite Into it