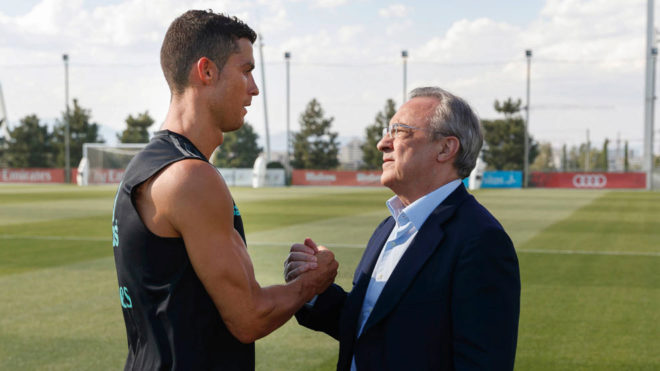 Another day, another Real Madrid manager is on the verge of being fired. The blame is being placed on Lopetegui for Madrid’s struggles but the buck stops with Florentino Perez.

He is the man in charge, the managers are merely small pieces in the chess game.

Real Madrid is not like most clubs where the manager wields a great deal of power and can make big decisions. In ‘Los Blancos’ things don’t work like that.

Florentino Perez is the one who signs off the big decisions, which player leaves and which goes. Now you might say all club chairmen do that and that is true to some extent.

What makes Madrid different is the fact that the manager gets hardly any say in these decisions. Their opinion counts for very little, even if their name is Zinedine Zidane.

Do you think it is an accident that Zidane left the club? how could he be fatigued from coaching when he was only in the job for three years.

Perez is the one that drove Zidane out of Madrid. He didn’t fire him or push him out with his words but with his deeds.

Cristiano Ronaldo has stated that “The things he told me, he never said from the heart” when he was asked about the Real Madrid President.

This is a 5 times Ballon d’Or winner who was their top scorer for every season he was at the club complaining that the owner never showed him any respect.

A player that other clubs would sell their whole team just to acquire!

Ronaldo went on to state “The president looked at me as if I was no longer indispensable to them”, let those words soak in for a minute.

CR7 is still at the top of his game and has rewritten what we thought about player’s longevity and so-called peak years. He told Marca that he basically felt unwanted at the club and this was mostly coming from Perez, not the fans or his teammates.

Lopetegui will be fired and made a scapegoat but rest assures this is all Florentino Perez fault. He lost Zidane and Ronaldo in the same year.

He was the one who thought Gareth Bale could take over as the talisman of Real Madrid and replace a 50 goal a season machine. The buck stops with him.