Jamaican roads are like some old time curtain my granny use to have; full of holes. If you drive a car you spend at least half your time dodging potholes and trying to avoid buying new tyres and suspension. You cannot even just go for a comfortable cruise and relax because you have to be scanning the floor constantly for the next pothole that might split your tyre and bend your rim. 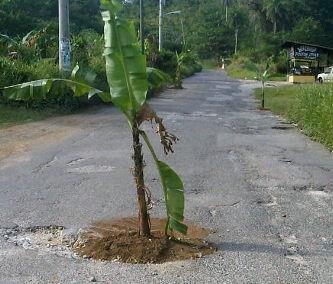 Not only are bad roads expensive for motorists, they are dangerous as well. A lot of accidents happen because people swing from potholes and crash into other vehicles. If a pothole bursts your tyre at a certain speed, you could get a one bedroom apartment at Meadowrest or Dovecot. Since most of us have been alive, its always been like this. We tell ourselves all sorts of comforting lies as to why the roads cannot fix and stay fixed. Some of these include…

* There is no money to fix roads

* We are a third world country, we cannot do any better

all a bunch of nonsense

It is more expensive to fix something 10 times than to fix it once. if Government can find the money to pay the same people 10 times to fix one pothole then they could have afforded to fix it properly the first time. No matter how much money road contractors get to fix the road, as you quint the road mash up again.

This means that they are either amateurs who don’t actually know how to build roads or they are lazy and just trying to “b*tch up” the roads because they know more tax dollars coming again at a later date. If your plumber comes to your house 5 times to fix a pipe and it starts to leak again within a week every time, you need to wake up and smell the coffee. He either doesn’t know how to fix the pipe or he is playing you. 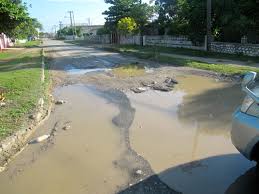 our culture is too tolerant of excuses

This idea that we are a suffering third world country that cannot do any better is utter nonsense. This is the mentality that prevents nations from developing, as people tolerate and accept mediocracy and underachievement on the premise that it is impossible to raise standards. The people who are supposed to answer to the taxpayer are well aware of this mindset and they take advantage of it. This is why accountability remains a serious issue in Jamaica.

Road construction is a serious skill, it is not one that should be taken on by amateurs. If 30 minutes of rainfall digs up a road then the road contractor who carried out the initial work are clearly not experts. The way some people act, you would swear that Jamaica is the only country in the world that gets rain. Everybody else gets perfect weather so when millions are spent to fix a road and a downpour wash it all away we should understand “a so it go”.

Some of these men and women who care carrying out road construction in Jamaica are just easy votes for politicians. They are given the work because they come from that constituency and the MP knows that the favour will be returned in votes. Road construction should be carried out by trained, skilled engineers who have no ulterior motive but to get the job done for which they are paid.

why rain don’t dig up the roads built by the chinese?

Don’t you find it strange that the roads that are built by the Chinese in Jamaica, don’t run down as fast as the ones built by local road contractors? that is a fact and if you allow so called patriotism to blind you to that then that is your problem. Why the rain don’t dig up those roads? are they immune to this super strength acid rain that seems to destroy the rest of the country’s roads?

Picture this; a man is hiring for the position of accountant in his company. He has one woman who is very qualified and has a lot of experience but she isn’t very attractive and he has another woman who is a beauty queen but is seriously lacking in the brains department. He hires the beauty queen because he is thinking that down the road he can have sex with her but in the process he damages the company’s performance. She just doesn’t know how to do the job properly and that will be reflected in the work she puts out.

Do not be fooled by emotionally charged “patriots”. Those big pretty roads the Chinese are building use a lot of Jamaican talent to construct. There are very qualified labourers and engineers who play a key role in building these projects. Those same people who have the knowledge and experience of having worked with the Chinese could be put to good use on some of our local roads.

They would have seen all sorts of challenges that were faced with the building of the North-South highway so places like Red Hills Roads and Waltham should be a walk in the park. The harsh reality as to why some of these professionals don’t get given the work to fix some places are because they don’t come from the constituency.

I am all for employment but people must still be qualified and trained for the job they are given. Some of these men working on the roads are more concerned about hiding from the sun to prevent their skin getting darker than actually fixing roads. Hard to imagine that professional road builders wear long socks, hoodie and a t-shirt over their face to work.

If you want to see just how amateur some of these road works are, don’t look at the whole road. Look at how they fill potholes. Any professional should be able to fix a pothole so that it is flat and level with the surface around it. This means that when a car drives over it, there is no feeling of driving over a speed bump. This happens time and time again, what was once a pothole is now a hump in the road as they dumped some asphalt and smooth it out without making sure the surfaces are even. As I said, either they are either amateurs or lazy……….