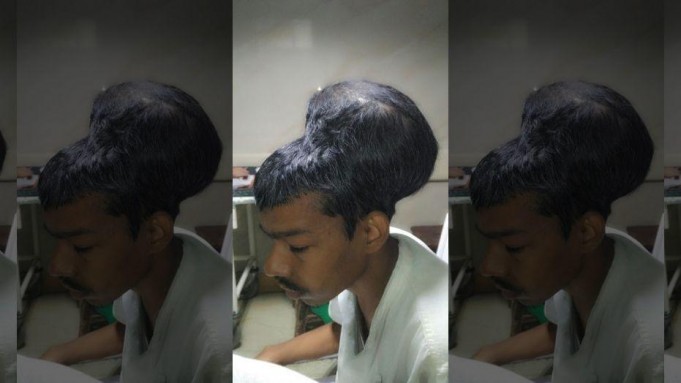 A team of doctors in India have removed a tumour that is believed to be the largest ever measured on record. The patient has been suffering for 30 years with the tumour and it continued to grow all those years until it had to be removed. It started out as just headaches and vision problems until it was later discovered to be a serious problem.

The surgery took 7 hours to complete with the 31 year old patient needing 11 units of blood transfusion to stay alive. After the tumour was removed, it was weighed and it came in at a healthy 4 pounds. This is bigger than a lot of newborn babies, the fact that he survived all these years is truly incredible.

How did he sleep comfortably? did he wear hats? how did his barber shape up his hairline? so many questions with so few answers. Anyway, thankfully the patient had a successful surgery and is now making a recovery after being on life support for three days. The Report also mentions that the man had completely lost his sight but there is a possibility that he might see again, now that the tumour has been removed.

If you are suffering from frequent headaches or feel pressure in your head, do not assume it is just “gas” or the flu. Get it checked out as it could be something much more sinister and life threatening.