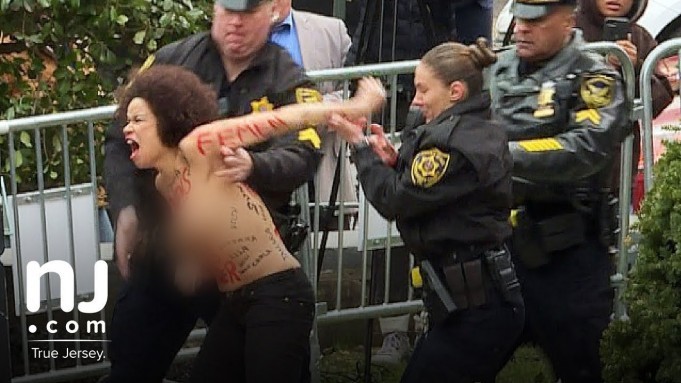 Nicolle Rochelle, a former actress on the Cosby Show created quite a scene today at his court appearance.

She took off her top and with her bare breasts exposed she charged towards Bill Cosby. She had the names of all the alleged victims written on her body as she claims this was to “show support” to them.

Nicolle Rochelle was on the Cosby Show when she was younger and has admitted that Bill Cosby has never done or said anything inappropriate to her.

She states the topless stunt was done because she was “hoping victims would feel some sort of connection with me. I wanted to express the anger that they maybe can’t express”.

In other words, she wanted some attention. How exactly could she “express” an anger greater than the alleged victims? and if so, why would she need to her off her clothes and express her breasts to express this anger?

none of this makes much sense and the whole case is turning into a circus. Nicolle Rochelle lives in Paris now and has nothing to do with this case. Did she fly back to America to pull off a stunt like this in the name of feminist justice? highly unlikely.

If we are going to get to the truth, we must block out the distractions and attention seeking. Nicolle Rochelle has nothing to do with this case and she has admitted that Bill Cosby has never done anything wrong to her or anybody else on the show.

How much help does she think the women who accuse Bill Cosby of these acts will get by stripping off her clothes and jumping in front of TV cameras. If her plan was to get talked about it worked, as yesterday the average person did not know who she was or even remember that she had a brief stint on the Cosby Show.

Now her photo is all over the internet and she is a topic of conversation again. All while the women she claims she is doing it for are nowhere to be seen.