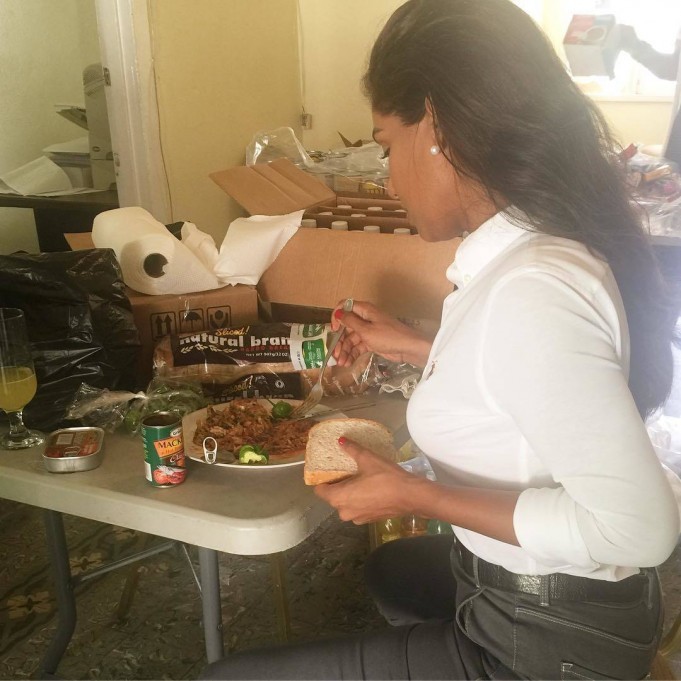 “Man dunce but man no fool”, the infamous words of an old timer that we use to see by the school gates back in the day. He would bring this line up whenever he spoke about politics in Jamaica, he argued that even though he cannot read and write well, he is still smart enough to spot political tricks from a mile. If he was still alive, he would be calling out Lisa Hanna for this stunt she just tried to pull on social media. Some of you are going to get offended by this because you love to fall in love with politicians and political parties when you should be in love with Jamaica. Get your tissues and your belly ban from now…….

we don’t believe you

Put your hand up if you think Lisa Hanna, is really so hungry that her only option was to eat tin mackerel and bread. Anyone? yea I thought so. The former beauty queen, actually let me correct that and say the beauty queen(she looks like she could win miss world again if she enter) recently got married to her longtime boo; Richard Lake. For those who are not aware, this is the man who owns the Burger King Franchise Restaurants in Jamaica. Irony!

false modesty worse than show off

Imagine being so hungry, that you have to draw for an emergency meal(in this case tin mackerel and bread) but right before you eat, you ask someone to get out the camera and take a picture. The whole thing seems fake and it really is unnecessary. This is an attempt to show the Jamaican people that “I’m just like you”, but it is far from the truth. For Lisa Hanna and the other well-fed politicians, a tin boom is a choice, a photo shoot opportunity, a gimmick, for alot of Jamaica it will be their Christmas dinner. When the Instagram cameras are off, its back to lobster and steak.

False modesty is defined as “Behavior that is intended to seem humble but comes across as fake and unflattering”. In other words, its someone who pretends to be humble knowing full well dem “boasie” like a peacock. I would rather the show off over the false modest any day because the show off is being honest. As Jamaicans we are naturally “boasie” people, anybody who claims otherwise is being disingenuous. Jamaicans range from kinda “boasie” to well “boasie”, that’s it.

sardine and mackerel together? proof it was a photoshoot

This is what happens when your cameraman for your photo-shoot doesn’t understand the vision. In the photo, there just happens to be a tin of sardine, casually placed on the table as well. Nobody does that, its either sardine or mackerel. This reminds me of the uptown lady who went into the shop and asked for big jill of bread. Poor thing was trying to show she is one of the masses and it backfired.

I can already hear the tribalists screaming this post is politically motivated, but it really isn’t. Lisa Hanna is not alone, this is a common thing in politics to use symbolism and image to win the hearts and minds of the people, which ultimately wins you elections. Check the social media for alot of these politicians and you can’t see any achievements worth talking about. They cannot show you the roads that are fixed, the hospitals that are well equipped, the schools that are renovated etc.

getting attention for everything except being successful at your job

If you are a chef and every time you are in the news it’s because of your hairstyle, guess what that says about your cooking? if you are a footballer and every time you are reposted on social media it’s because of your singing, guess what that says about your football skills? instead, our leaders must do like Usain Bolt or Michael Jordan. Get the results first, succeed first, break records first and then you can milk image for all it’s worth. You could post pics of you shaving your cat and nobody would care if these constituencies were developed and didn’t have potholes the size of the grand canyon.

If the PNP and JLP figure out how to crush this crime monster they help to create, then who cares what they post on social media. Results talk and bull**** walks. The fact they are such underachievers but have the audacity to come around trying to pretend to be “one of us” is what really annoys most of us. Lisa Hanna is not alone, she is just the easiest to look at and have one of the largest followings. Reality is alot of these politicians need to stop posting until they have some positive results to show off. We tired of the gimmicks now.