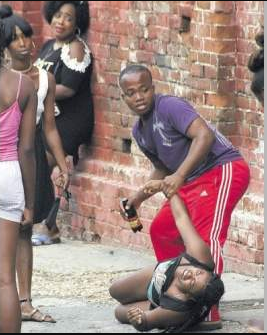 You know how Jamaicans love to brag that we have the most churches per square mile? well, even they are not safe anymore. 9 people were shot in a gun attack that shouldn’t surprise anyone that is realistic about the type of society we live in. The funeral was being held for a vendor who was stabbed to death in an altercation downtown. According to the Observer the man who was killed was not a “badman” so the gun attack was not necessarily because of him.

The alleged reason for the attack is that two communities are currently at war; West Street and Luke lane. The dead vendor was from one community and hence he had alot of people from his side turn up to say their goodbyes, which is to be expected. What people were not expecting is that gunmen from the other side would also turn up and shoot up the funeral.

When the gunfire stopped, there were nine people who got shot and two of them ended up dead on arrival. What makes this story funny(in a dark, twisted way) is that we love to pretend like we have a special relationship with God. Jamaicans can’t wait to tell you how much Bible they have and how often they go to church. Imagine a whole nation full of God-fearing people, strange how that same island is always at the top of the murder, corruption and outright decadence list every year.

The whole Island is covered in blood

People need to stop talking about “bad place” and “bad areas” because nowhere in Jamaica is safe anymore. Parishes like Trelawny and Manchester that use to be getaways are now plagued with violence. The church that use to be seen as a refuge is now a killing zone. There was a time when even the bravest gunman would not go anywhere near a church or even church people for that matter. These modern criminals fear nothing, whether it is human or divine.

school, church, police station get shoot up, the only question is where next?