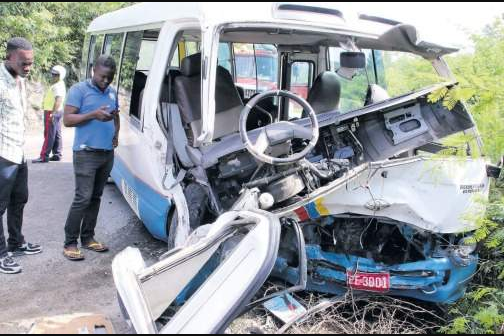 When you are not looking out for gunman and thief, you have to be looking out for careless drivers. They say there are 6 million ways to die but in Jamaica, it’s more like 10 million. A Toyota Coaster full of passengers travelling from Kingston To Morant Bay had a head-on collision with a Mazda motor car.

Reports are that it was the Mazda Car that was overtaking recklessly and ended up crashing into the bus. The driver of the coaster had to be cut from the vehicle by firefighters. Incredibly, nobody has died in the accident. Based on the pictures, you would think there would be some sort of funeral planning going on but thankfully that is not the case.

The damage that was done to the vehicles suggests that at least one of the vehicles was speeding excessively. The Mazda was the car that was doing the overtaking so that driver is likely to be at fault. All though, he/she will probably try and blame everybody else except themselves. “The devil made me do it”, “Him shoulda see me a come” are two of the lines you might hear, but there is zero chance of owning up to being a reckless clown that almost cost 30 people their lives.

Ninja Man Is Being Treated Badly In Prison By Other Inmates