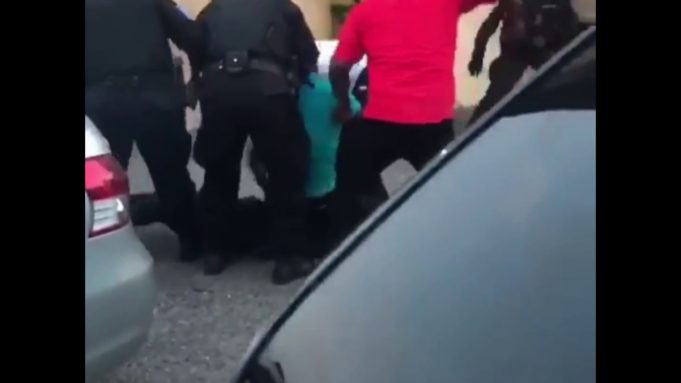 A new video of the incident between Andrew Woolery and security officers from King Alarm has been released. The video exposes Mr Vegas and the lies he told people on social media regarding the build-up of the incident.

Vegas claimed that Andrew Woolery carried “gunmen” to beat up the man in the blue/green shirt that was shot and the man was out for revenge.

He tried to use this to justify the attempt by this said man to disarm the licensed firearm holder.

This new video puts a lot of holes in that story and unless we see more to convince us otherwise, Andrew Woolery will walk away from this incident without any charges and much wealthier from the lawsuit he will win against King Alarm. The only way that could be the same man is if he changed into a green shirt in between the two videos. In any event, King Alarm says the green shirt man doesn’t work for them.

The thing to note on this new video is that after the men enter the guard room, the security enters upset but showed no sign of physical damage.

If 3 men just punched and kicked you, there is no way you would walk out the room so stable and upright.

He also had on a uniform and there was no sign of his clothes being pulled up or torn which would be visible based on the beating Mr Vegas claimed he received.

The man then seemingly throws something at Andrew Woolery at the 31-second mark. After this movement, Woolery is seen to pull his firearm and then quickly putting it back into his holster.

There was no gun-butting or even a prolonged aiming of the weapon on the man. This video only helps Woolery, it harms the guards.

Now maybe there are more videos that will show the missing pieces to this puzzle. Even if it does come out that Woolery did assault the guard first, then that still would not justify the actions of the man in the blue/green shirt and the King Alarm guards.

That would mean that Woolery should be charged as well!

MP Dr. Lynvale Bloomfield Stabbed To Death In His Home