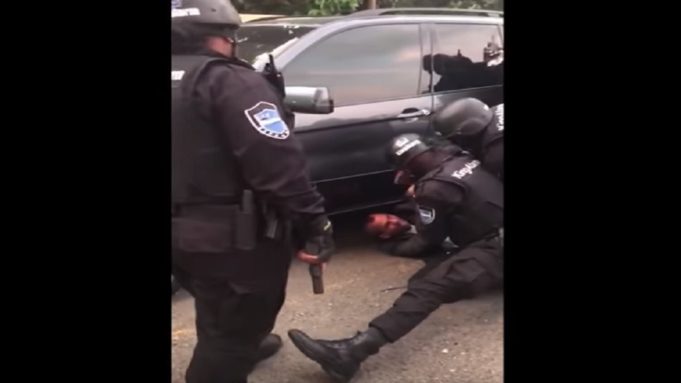 By now you have probably seen the video going around of King Alarm “officers” stomping on real estate agent Andrew Woolery’s head. They also slapped him in his face and outright abused him despite having a camera pointing at them.

There is no point even talking about the Superman wannabe who got shot in the neck as he is lucky to be alive after the foolish stunt he tried to pull by disarming Woolery.

There will also be no point talking about Mr Vegas as it is unlikely that you expected much better from him or even surprised he somehow managed to get himself mix up in more chaos.

Some security personnel think gun and uniform make them God

A lot of these private security companies do great work, they protect homes, places of businesses, schools etc. unfortunately, the good things don’t make news so when we see them in action it is usually for drama, often negative.

One of the biggest problems with these companies like King Alarm is that they hire a lot of washed up police officers. Some of them go to private security because the pay is good and it is less hectic than the police force.

Only the people who are clients of King Alarm can call them for help, anybody can call the police.

The female officer that was talking as if she thinks she is the baddest thing on planet earth was an ex-police officer. She somehow managed to outdo her male colleagues in acting like a hooligan in uniform.

The way she spoke to the man is how a lot of Police talk to law-abiding citizens, “hey bwoy”, “hey gyal”, “me a badman”, some real clowns who don’t realize they work for the taxpayers.

If you heard the audio and not see the video, you would think you were listening to someone from a Montego Bay or Spanish Town gang. You would not think these are alleged professionals who are trained to protect life and property.

Those bunch of delusional security guards thought they were the JDF. They forgot their role and overstepped their boundaries.

They blocked the gate so the man could not exit and broke the laws in so many ways that the question is how much will King Alarm be sued for, not if they will be.

Every day, all they do is ride up and down with screw faces. Security guards(not from King Alarm) were on the gate when Simone Collymore was murdered in broad daylight, didn’t do anything when faced with real gunmen.

They suddenly found their strength when it’s 6 of them against a real estate agent though.

Of course, King Alarm does have good guards! even in the very video, you can hear one of them tell his coworker to stop hitting Woolery.

That man is now caught up with the rest of these wannabe Rambo. Hopefully, his job is preserved as clearly, he is a man of integrity to stand up to the majority who were acting rogue.

Andrew Woolery is the nicest gun owner in Jamaica

Whatever Woolery eat for breakfast, he needs to sell it to the rest of us. I assure you, the average Jamaican would not have fired one shot and call it a day.

In hindsight, he showed great patience and restraint. This man was outnumbered and someone made an attempt to disarm him.

Most people would not stop squeezing so quickly, trust me on that. He was also completely traumatised, even more than the Superman who got shot.

Some of those King Alarm officers lucky they didn’t catch a few strays as well.

I don’t know why people with guns and uniform and guns think they can trample over citizens like they think this is 1982 when people just cry and move on.

Let this be a lesson to King Alarm and other private security companies. You are not the army and even if you were, you still cannot trample over citizens like this.

John Azar, who is the boss for King Alarm has come out and addressed the situation very well. He has not tried to make bogus escuses which is refreshing.

His leadership has been exemplary so far and it is safe to assume that personnel who overstepped the lines will be dealt with as soon as their investigations are over.

Anthony Joshua Is Overrated And Will Lose To Top Fighters

KC Has Been Cast In The Champs Wilderness like The Israelites