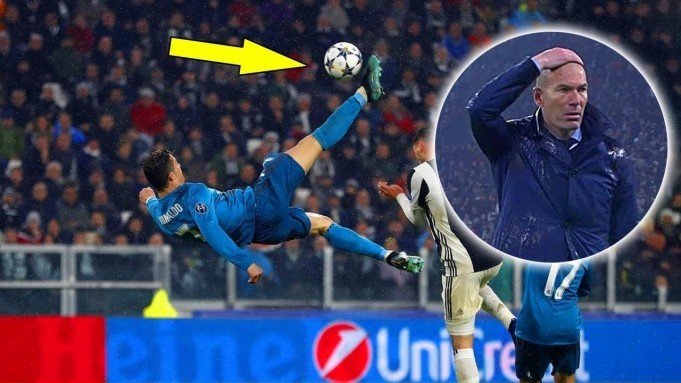 It is amazing that after a decade of brilliance, critics still try to belittle Cristiano Ronaldo in an effort to elevate Lionel Messi. His bicycle kick goal against Juventus had the whole world applauding, except the Ronaldo Haters.

Might as well rename the Champions League after him 😂🇵🇹 #Ronaldo pic.twitter.com/2JA5Flvqbv

The Real Madrid striker’s legs were the same height as the crossbar as he blasted the ball into Buffon’s net. The goal was so special that even the Juventus fans in Turin had to give him a standing ovation. They knew they were looking at pure brilliance in the flesh.

As usual, people immediately brought up Lionel Messi and started to compare them. Every single “criticism” they have levelled against Ronaldo over the years, he has answered them.

The current last straw Ronaldo haters have left is the “he is arrogant and Messi is humble” nonsense. For some reason, people believe that being ultra confident and extroverted is a character flaw.

First of all, none of these people knows Ronaldo or Lionel Messi in real life. There is simply no way to know what their characters are really like based on their mannerisms on the pitch. Messi does not have a big personality, he does all his talking with his feet. Nobody wants to follow Messi’s life off the pitch because it would be boring.

That is not a bad thing as everyone can’t be bold and out there like Cristiano Ronaldo. A matter of fact, they balance each other out perfectly.

What is frustrating is that when Messi does something bold, it is applauded but when Ronaldo does it he is an arrogant narcissist. Remember last year when Messi scored the winner in the La Liga Classico? He took off his shirt and showed it to the Bernabeu crowd. He was not bashed for doing this instead, he was applauded.

When Ronaldo rips off his shirt and celebrates, he is told that he is vain and full of himself. The problem is probably that Ronaldo has a great physique and it makes other people, especially men get insecure. nobody envies the guy with that “normal” body but the ripped guy? every move he makes is criticised.

Ronaldo and Messi are equals, it’s just down to who you prefer

Cristiano Ronaldo haters act like Messi is head and shoulders above him. They act like there is clearly a gap in quality and that is rubbish. Messi has a lot more weakness in his game than Ronaldo. He has one good(great) feet, he is not as athletic and cannot score some of the goals Ronaldo scores.

This does not take away from his greatness as he can do things that Ronaldo either can’t or doesn’t attempt to do. Both of these players are magical and should be appreciated. Unlike Pele and Grraincha, we can see these players on a regular basis. We are blessed and should be grateful.