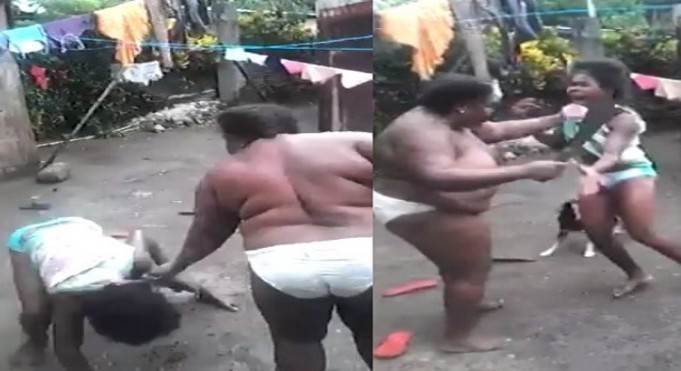 Doreen Dyer, the lady who became viral for beating her daughter with a machete in nothing but her panties has been spared any jail time. She was sentenced to three years probation where she has to get parental counselling and anger management.

that video was truly disturbing

The video went viral for a number of reasons; she was in her underwear and her breasts were exposed, she was also beating her child with a machete and then to top it off she also gave a passing dog it’s own spanking with the machete. This sparked a number of funny memes on social media but it really was a serious situation.

The video divided the nation, some people thought she was cruel and cold while others thought nothing was wrong with it as that sort of “discipline” is necessary to make children grow up to be better adults. Personally, I don’t subscribe to that sort of thinking that beating children until they are black and blue is needed to make them into better people, but that will be addressed in another post.

What was clear in the video is that Doreen Dyer was clearly stressed out and at breaking point. The fact that she couldn’t bother to put on clothes shows that she was in a dark place when that video was recorded. Why she was so stressed might not even be the child’s fault. Sometimes, adults face adults problems and then when their children do something they shouldn’t, all that anger is released on the child.

She also seemed to be living in poverty based on the background of the video and that comes with its own set of issues. I just think the machete beating was too far and now that she is calm, even Doreen Dyer would say the same thing. As it relates to the verdict, some will say its too light and others will say its too much. I don’t think she should have been given criminal type sentences but at the same time, parents must know that this excessive force is not accepted, even if your own child.

allow teachers to beat with machete then since it works

What if it was a teacher did this to an unruly student? would the people who defend it still do so? or is it a case where a parent’s blow from a machete is less damaging than a stranger’s blow from a machete? I would love to know how that works and if people would be singing that teacher/policeman/bus driver praise as well…