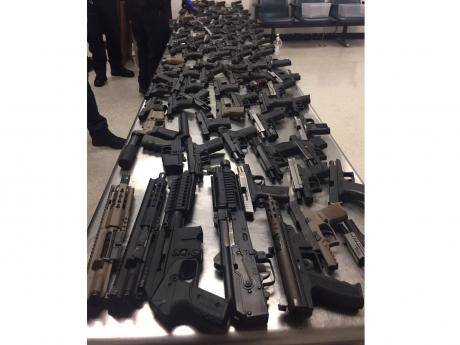 In what is clearly one of the largest illegal weapons seizure in recent memory, 119 illegal guns have been seized by US officials at the Miami airport. The guns were on their way to Jamaica in what would have been a merry Christmas for the island’s criminals! Luckily they were seized before they got a chance to land on the island’s shores. Gleaner Story Here

alot of lives have been saved

If those 119 illegal guns were allowed to land in Jamaica, it would have been a real disaster. Even if one gun was to kill one person(best case scenario), that would still be 119 dead citizens to add to the already high body count. These criminals are hell-bent on destroying our communities and nation it seems.

these are the people Jamaicans big up and give godfather status

Being a don in Jamaica is like being an Olympic gold medalist in other countries. Alot of people dream to reach that status one day. People from certain communities who escape poverty usually turn around and use their success to buy guns and ammunition, so they can get big man status in said communities. They then keep their once a year “treat” aka keep the people sweet so they don’t sell you out to Police event and pretend to be poor people champions.

if you love the youths, why arm them to kill each other?

Since these people have the resources to get access these type of weapons, then they would have no problem accessing things that can actually help their communities develop. The most annoying thing is that these are the people who musicians love to big up and give “forward”. The same people who put $1000 US guns in the hands of young men who don’t have $1000 JA dollars in their pockets.

why are our customs so useless?

Seems like the only thing Jamaican customs are good at is overcharging law-abiding citizens for the goods they import. This 119 illegal guns seizure was done by the Americans on their side. If that shipment had landed in Jamaica, it would stroll right through customs and made its way on to the streets of Jamaica. There is clearly some incompetence or corruption going on at our nation’s ports. You cannot bring a toothbrush through without them digging up your barrel and finding it, but all these high power weapons in Jamaica just keep magically getting pass them. “Tom drunk but Tom nuh fool”.

Seal Calls Oprah For being A Hypocrite