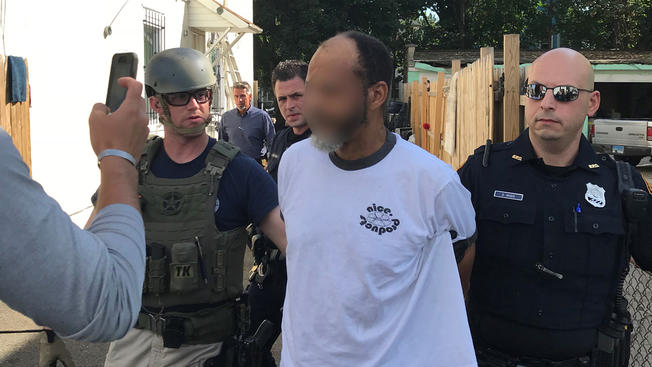 54-year-old Fugitive Andre Neverson has been arrested in Connecticut after being on the run for 16 years.

He was on the “Top 15 Most Wanted” fugitive list after he killed his sister and ex-girlfriend in 2002.

On July 8th, 2002 Andre Neverson shot and killed his sister in the head over a dispute about a property that they both owned. After one murder he seemed to not be satisfied and he kidnapped his ex-girlfriend the following day.

Two days later she was found dead. To make things worse, Neverson was on parole for attempted murder at the time of the double killings.

He went on the run from the law and was daring enough to try and harm a third woman, this time another ex-girlfriend. luckily, a relative walked in and he ran off before any harm could be done.

Andre Neverson targeted women, in particular, those that are close to him and he might feel wronged him in some way.

Since escaping and going on the run, the Trinidadian born Neverson has been spotted all over the Caribbean. Most infamously, his name was called alongside the man who killed Simone Collymore as it is alleged that they are friends. Story Here

“The United States Marshals Service is extremely pleased to have a violent criminal, who murdered two women in New York, off the streets of Connecticut after 16 years on the run,” said U.S. Marshal Brian Taylor.

This has turned out to be one of the longest and complicated cases in recent times due to the slippery nature of Neverson and his ability to evade the law enforcement officers.

The crimes he committed were in New York so the state is likely to request for him to be extradited there to face trial.

We will keep you updated on this case as it has garnered a great deal of interest from both the Caribbean and North America.