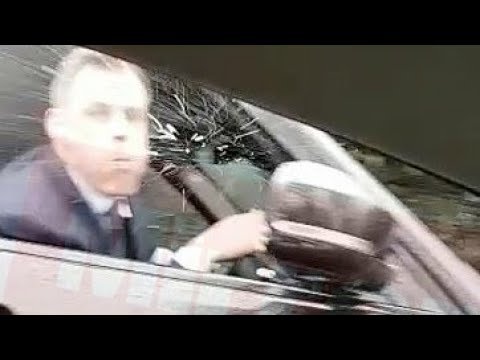 Former Liverpool FC player and Sky Sports presenter Jamie Carragher was caught on camera spitting at a 14-year-old girl and her father after the Manchester United and Liverpool game.

The pundit has now been suspended from his job at Sky Sports News and is due to have a crunch meeting with the company’s senior executives about his behaviour.

The video shows the father of the girl driving beside Jamie Carragher and reminding him that Manchester United won the game 2-1. In terms of football “banter”, this was very lightweight, it’s not like the man was saying anything derogatory or aggressive.

Jamie Carragher then proceeds to wind his window down from his Range Rover and spits towards the car carrying the girl and her father. The girl was in the passenger seat, which put her directly on the same side as Carragher. That is why she was the one who got spat on and not the father.

If a mentally challenged person spat on you, it would still make your blood boil. Now imagine a sane individual, who not only represented Liverpool but also England’s National team. This is a man who we see on our TV sets week in, week out and he seems like he has it all together. Unfortunately, what we see on TV is usually an act.

This video has shown us the real Jamie Carragher and it is very disappointing. There is no excuse for this sort of disgusting act and the fact that the driver took it so well is a small miracle. Most men would not let this incident slide this, especially when his daughter ends up being caught in the crossfire.

he claims he did not see her

This is hard to believe as he is an SUV, which gives him a great vantage point to see into the next vehicle. Even if he did not see her, that is irrelevant. He has already started the apology and sad story interviews but Sky Sports is now faced with a tough decision. Do they give him a slap on the wrist or do they treat him like the vile abhorrent person he clearly is? let’s see……….