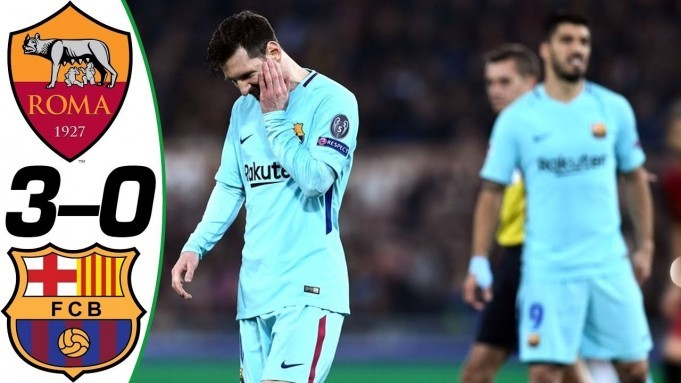 Roma has defeated Barcelona by 3-0. This means that they win the quarterfinals tie on away goals and have knocked Barcelona out of the tournament.

Barcelona had won the first leg at the Camp Nou by 4-1 and looked set to book their place in the semi-finals.

The bookies all agreed that Roma had little chance and who could blame them? This Barcelona team had only conceded three goals the entire Champions League campaign.

Lionel Messi had a terrible game. He was offering very little going forward and when his team had their backs against the wall, he offered nothing in defence.

This result now opens up the possibility that Real Madrid and their talisman Cristiano Ronaldo might go on to achieve the three-peat. They play their second leg tomorrow against Juventus and they also have a three-goal advantage.

The big difference is that Ronaldo and co will never go out this poorly. When pressure is on, Messi has a tendency to either go missing or produce a moment of brilliance. In this game, he disappeared. Ronaldo, on the other hand, is a labourer, he might not do anything brilliant but he won’t disappear. He will be back there defending and helping out his team.

Now that Barcelona is knocked out the Champions League but are sure to win La Liga, the Ballon d’Or will likely be decided at the World Cup. Messi and Suarez both played in this game against Roma and neither of them could help Barcelona. These are the games where the title of best player in the world are decided and both came up missing.

The Catalan media will have serious questions about what went wrong in today’s game and will likely call for a couple heads. They know that La Liga is already won and if Real Madrid wins the Champions League it will completely overshadow their success this season.