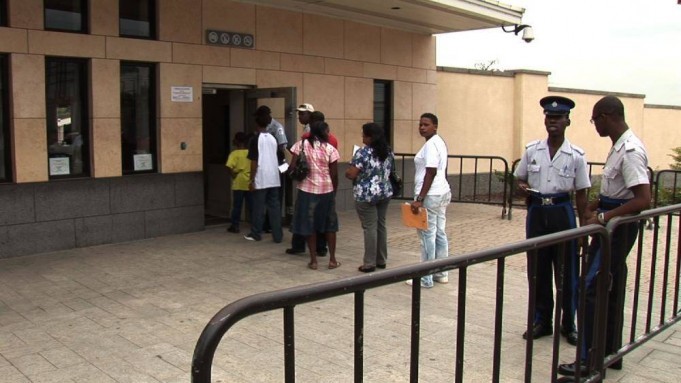 Let’s be honest as a nation, we have a problem with discipline, order and structure. People rebel against even the simplest things, that are supposed to make their lives easier. Lines, stop lights, fences are all seen as a burden that must be skipped and evaded at all costs. One could be fooled into thinking that Jamaicans just cannot maintain discipline and order.

Except when it comes to the American Embassy! if you want to see the most unruly, vulgar and disorderly people transform into choir boys and girls, pass by the American embassy in Liguanea. Everyone is smartly dressed, orderly and even the vocabulary increases. “Good morning sir”, “good morning ma’am”, complete with their best accent and nicest smile you will ever see.

You step on a man Clarks in a party and he probably tries to fight you, but up at Uncle Sam’s embassy? “dat cool man”, he even takes on the tourist saying “irie mon”. If they have to wait 5 hours then “no problem mon”. They will not tell the American embassy staff to “s*** yuh madda” if they tell them to lower their voice while on their phone. Let a local business owner tell them the same thing and see how fast things escalate!

Where does this good behaviour come from? well, its a combination of things.

* They want to leave Jamaica so badly that they are willing to transform into a completely different person. Jamaicans spend over 3 Billion US dollars every year at the US embassy US Embassy Spending By Jamaicans

* That is their true personality. Alot of Jamaicans are actually brought up in good homes and know right from wrong, but they see that the society is tolerant to indiscipline and start “follow bad company”.

* The America Embassy is not as lenient towards indiscipline and bad behaviour like we are. We think being loud and vulgar is funny, being late is normal and being quick to wrath is proof of manliness. The people who go to the embassy to get their visas know this and have to conform or face the consequences.

The big picture here is that we can do better. We know what is expected of adults in a civilized society, but one fool makes many. People do what they can get away with mostly. This applies to behaviour as well, see a man who knows that his woman will leave him without hesitation has to tread carefully. He thinks long and hard about every decision as he knows what the consequences can be. The other man who has already “dissed” his woman 100 times and she still stay with him is more carefree. In the back of your mind, you know all she going to do is cry and take you back so you “diss” her again.