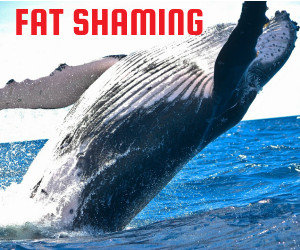 So much for equality. One of the current hot topics for social justice warriors is the ‘fat shaming’ of women. The argument goes, if you say you are not attracted to a fat woman, then you are shaming her. If you mention anything about a woman’s weight, you are shaming her and therefore you are another example of the evil sexist, misogynistic, patriarchal disease that is responsible for all the world’s problems. You should ignore your eyes and say “all women are beautiful” even though that is a general statement and generalising is bad(unless you are saying something people want to hear apparently).

Declaring that someone is overweight and thus you do not find them attractive is not a sign of men oppressing women or fat shaming them, it is a sign that people have different preferences. A man should be able to say I don’t like her because she is fat, the same way a woman can say she doesn’t like a man because he is not her type. No man goes around crying and starting social movements and hashtags because a group of women reject them based on their look. That would be childish and insecure, even though the irony in all of this is that nobody shames people more than women.

Women make fun and belittle short men, get it belittle short men? Anywayyy as I was saying if a man is short, women openly declare they do not find them attractive. Bear in mind a man cannot control his height, it is determined before he is even born. A fat woman can always lose weight and get in shape, Kevin Hart is stuck at the same height for the rest of his life. Can anyone show me the group of 5 ft 4 men who are running around claiming ‘short shaming’? please show me them, maybe they exist but I don’t know.

A fat woman can always lose weight and get in shape, Kevin Hart is stuck at the same height for the rest of his life

A man who is broke and lives with his mother is shamed all day, every day. There are no tears shed for these guys, liberals do not organise marches and bring out the pity crusaders for them. Men who have small penises are made to feel small and are often the butt of women’s jokes on television and pop culture. Again no man can control this, but still, they are shamed and nobody says anything because they find it funny. But suddenly when you call a fat woman fat, the laughter stops. Suddenly they turn to tears and we are being told that “all women are beautiful” whether they are 350 pounds or not. If you dare to not nod your head and agree with this sentiment publicly then you are transformed into a bad person overnight.

See a man must be handsome, earn alot of money, have a big penis, have a six pack under his shirt but must just accept any woman. He should just be grateful to even get the chance to meet one and expect nothing of her. Do not complain if she can’t cook, do not complain if she weighs the same as a whale, just shut up and accept whatever you get. Only women get the right to shame, only women get the right to express exactly what they want and dismiss anyone who doesn’t fall in that category.

If you disagree well you are a bad person, I mean how dare you expect to hold the fairer sex to the same standard as yourself. Don’t you know that’s how equality works? women get what they want and you get what women think you should get. Now shut up and go sit in a corner and feel bad for all the wrongs that have happened and is happening to women now. Shame on you for fat shaming women.

King Alarm And Other Security Companies Think They Are Soldiers

Nelly Rape? What The F Is Going On?