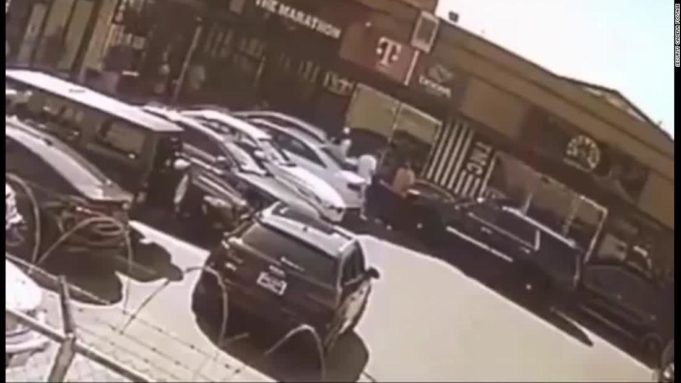 The surveillance video from the Nipsey Hussle murder has been leaked.

The video makes it clear that the killer had a personal issue with Nipsey Hussle.

Check out the video below

You may be asking how does the video confirm it was personal? well its simple.

The alleged shooter Eric Holder pulled up and immediately started shooting Nipsey and the people around him.

He then ran off and turned back to finish the rapper off. He shot him in his head at point blank range, just to make sure that he is dead.

Still, the part of the video that confirms it was personal was when the shooter kicked Nipsey Hussle while he was on the floor bleeding to death.

This was was not a hit man sent to do a job. They just turn up, kill and leave ASAP.

The don’t scream at their victims, they don’t kick them, they do the job and leave.

Alleged shooter Eric Holder was clearly acting out of rage. He had a personal problem with Nipsey Hussle and wanted to settle it.

Police allege that there was a dispute between Holder and Nipsey earlier. They allege that he left and came back to kill the rapper.

This story is the most believable as the man was clearly still very angry, not typical of contract hits.

Some locals from the area allege that Eric Holder was once friends with Hussle and they fell out because Holder became a “snitch”.

They claim Nipsey chased him from in front of his store and this caused a dispute to develop between the two men.

If this is the truth then Nipsey lost his life over nonsense.

The surveillance videos have also destroyed the theory that this was some government hit man.

This was clearly a spur of the moment murder. The shooter did not even know his exact escape route as he kept running back and forth trying to escape.

Lionel Messi Is Not A Big Game Player like Ronaldo