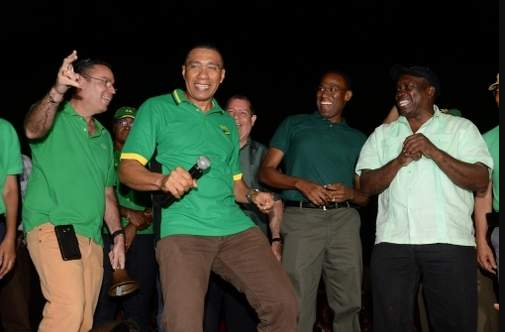 Dr Nigel Clarke is now the MP for North West St Andrew after he defeated Keisha Hayle by gaining over 60% of the votes in today’s by-election.

The preliminary results posted by The Observer show that Nigel Clarke received 4,448 votes compared to 2,812 that went to Keisha Hayle. The “Labourites” are now having their celebrations in Sherlock Crescent to celebrate their victory.

The PNP once again refuses to accept that this is the year 2018 and not 1988(they already took a big loss with that “Sugar Shane” defeat). Those fliers they pushed through people’s gates would work 20-30 years ago but not anymore. Keisha Hayle’s team did not lay out a clear plan for the constituency or outline her vision for the future. This is a JLP safe seat, you have to come with revolutionary ideas to shake them out of their comfort zone.

Instead, they posted a bunch of pictures on a flier and said these are the people who voted to keep bank fees. Then they picked out some headlines that highlighted the crime rate in an apparent effort to scare people to vote for the PNP.

their whole strategy was pathetic

The Jamaican people and especially the people of North West St Andrew are not dumb enough to think the PNP can solve Jamaica’s crime issue overnight. Neither party has the answer right now and that is a fact.

The PNP did not focus on the constituency, they acted as if they were going after PM Andrew Holness when really their competition was Dr Nigel Clarke. When you look at the flier that was promoting Nigel Clarke, you saw a list of plans and strategies that he wants to implement. Will he keep his word? who knows! Politicians are known for making promises they cannot fulfil but his campaign was clearly aimed at the constituents of North West St Andrew.

Keisha Hayle should have been the center of attraction

Instead of all these bank fees and hyperbole news headline gimmicks, they should have focussed on Keisha Hayle. The PNP should have gone deeper into the story of this woman and try to win the hearts and minds of the voters in NW St Andrew. Her journey and ideas should have been all over those fliers that they pushed through people’s gates and letterboxes.

The problem with these parties is that the old dinosaurs that run them think they are geniuses. They have these outdated strategies that use to work in the 80s when the country was far less educated and savvy. They probably didn’t even give her much choice and ended up destroying this woman’s campaign.

Keisha Hayle was unlikely to win anyway as this seat has been in the hands of the “Labourites” for a long time. Still, she has one of the most interesting stories and journeys in politics and she could have done better than this. There is no way around it, this was a landslide victory for Nigel Clarke and the JLP and in the end it wasn’t even close.

KC Has Been Cast In The Champs Wilderness like The Israelites